I know this is coming a bit too late but as a wise man said ‘ Better late than never’. During the festival of Ganesh Chaturti last month a friend of mine asked me if I wanted to go see the Sarvajanik Ganapati at Macchiimar Nagar  (Fishermen’s Colony).  A member of his team was a resident there and he had invited him for the festival and my friend asked me to tag along. ” It might be interesting. You might get to tell a story on your blog about this” he said. “Yeah! Let’s go and see. Might get a story” I accepted. 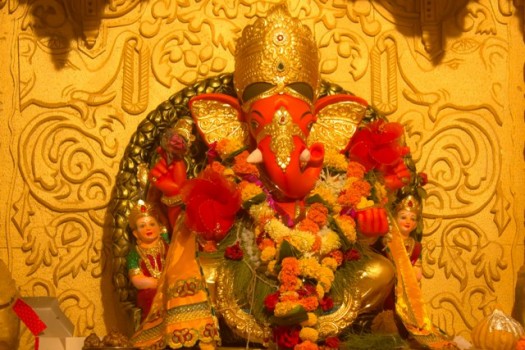 So armed with my camera and a notepad I met my friend one evenings (during this 10 day festival)  at his office in Cuffe Parade and together we headed out to Macchimar Colony. We reached there met this friend’s team mate at his home in the colony. After exchanging pleasantries he led us to the place where the entire pandal was set up. “This year we have the moorti (idol) of Lord Ganesh replicating the one at Siddhi Vinayak Temple” he told us. ” Its time for aarti. You do not mind having to wait for a while and attend the aarti ( prayers ceremony), right?”

The aarti was just about to begin. But he managed to introduce me to the chairman of the committee behind organizing the entire festival. His name was Bharat Dhanur A skinny man with a french beard the chairman, greeted me with a namaste and then shook my hands.

When I was a school kid, my friends and I used to organize the community Ganesh festival in our apartments. So I knew a bit of what goes into organizing a festival. But this was different. As opposed to organizing a festival in a housing society of 30 odd families and that lasted only day and half, here they were organizing the event for anywhere between 500-700 families for a duration of 10 days. So even if it was just a medium ( or may be a small sized) event it was organized by the people of colony itself. As opposed to many bigger ones that are organized by event management companies, political parties and having budgets and sponsors that run into tens of millions of rupees. And yes this one too had its share of the backing of sponsors and politicos, but it began  decades before the  vulgar commercialization of festival today. 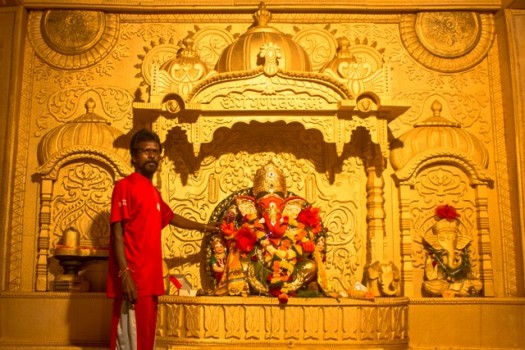 “I have been organizing this festival for more than. I was 8 years old when some  friends and me decided to start it. I had got one of the idols that was washed ashore after the immersion and kept it in that temple” he told me pointing to the temple “The next year,we kids decided to celebrate it and the festival lasted for day and half. And over the years it has become a tradition in this colony  and now we eagerly look forward to it every year”

Preparations for a years festival start almost 3 months before the festivals. And everything is managed by the residents of the colony. “It was easy earlier since all us here were fishermen. But not everyone here in the new generation are fisher folk . Lots of them now are educated and have better jobs and long working hours. And organizing a festival like this requires a lot of time and energy of the young. So we start earlier” the chariman  told me. 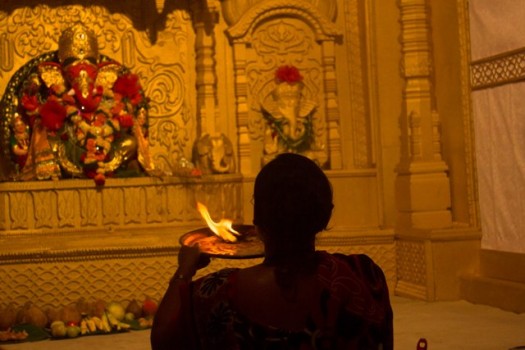 The aarti was about to start and a small crowd started gathering around the stage where the idol was placed. And then the bhajan started. The devotional songs blared through the cheap speakers that were set up among the back ground beat of dhol - an Indian percussion instrument - and hand held cymbals. Every song had a tempo a bit higher than the previous and when aarti that lasted about 45 minutes came to end it ended with this huge crescendo that just explodes. 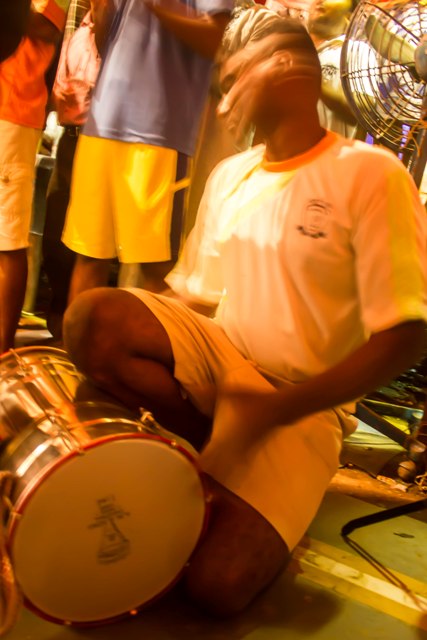 As the prasad was being offered a couple of young guys walked in. The guys - Pravin Raut and Tushar Tandel  behind decorating this entire set up I was told. We shook hands. “How much time did it take you to set this entire thing up?” I asked after exchanging pleasantries.

“Close to 3 weeks. I had help though. Tushar  here helped me set this up. We were the guys on the decoration team. It was our job.” Pravin explained and asked ” Do you like it?” 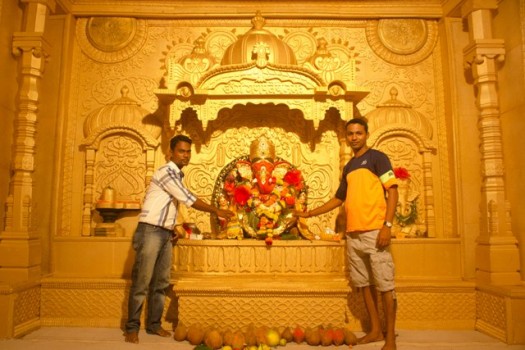 It was beautiful and I told him so. Like the beginnings of this event decades back even these guys started small. The first assignment was creating a small set for the festival at relative’s place. When they started doing a good job the relatives recommended their work to the organizing committee and they have  not looked back since. Every tiny detail in the set was designed by Pravin and Tushar And it was surprising to hear that none of them had  no formal or informal education or training in designing or painting or crafts of any kind. 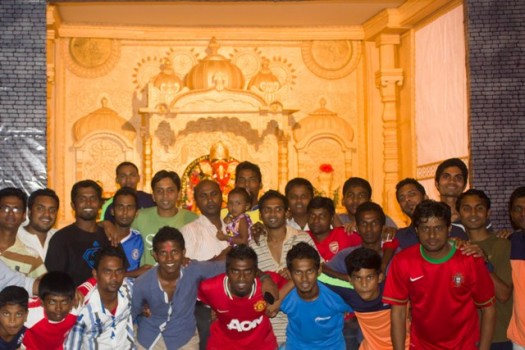 It was a small visit and a small talk , but here was I getting a glimpse of what goes into organizing a public festival. I was glad I accepted the invite and went there to see it.

Indian Travel Bloggers - My Favourite Five What happens in a CELTA course : Week 1

6 Months of travel and What I am doing next!