Its drizzling very slightly. I look at the sky above and see dark clouds. I pray that this real slight drizzle does not turn into something nasty. My bike had stalled just after I negotiated a steeply upward rising hairpin bend. But just a few meters after my successful turn on a road which was nothing more than a cut in the mountain broad enough for a small truck to pass through, my “beauty in red’ whimpered and gave up.  At more than 10000 feet ASL, I felt the air to be heavy, even though I was doing nothing more than riding. I took a few sips of water as I prayed before I pushed the electric start button to move on. The electric start gave a screech, but the engine failed to roar to life. I tried a few more times. The attempts met the same results. I decided to kick start instead of putting too much strain on battery using the electric starter and draining it off.  In a terrain like this where it took my close to 3 hours to ride 30 kilometers, and the nearest human habitat was at the same distance that was the last thing I wanted to happen. The kicking also met with failure. Shit!

“Why did I even think of taking this route?” I curse myself. The last 3 hours of ride had allowed a few doubts creep into my mind regarding taking this alternative route that I had tread on despite the warnings of some village folk. The fact that I was riding solo for the first time in my life and this was the first day of the challenging terrain of the Ladakh region was not helping as well. And when the bike stalls, I could not help but curse.

I was on my way to Zanskar valley. It was the first time I was doing solo ride and I thought of doing it big. So let’s make a third ride to Ladakh I thought a few months back. I left my home without a plan for the 20 days of my lonely journey. So when I met a fellow bikers from my hometown - Bombay, in the sleepy little town of Kud who advised me to ride to Zanskar, it was on. They provided me with an alternative route enter the Suru & Zanskar valley. This was different then the oft ridden roads through Kargil. “Since you are doing Srinagar Leh, just outside the town of Drass you’ll see a board on the right side of the road. Pointing to Umba La, follow that route and you’ll enter Suru valley at the village of Sankoo. Will save you a good 40 kms as well. But that’s beside the point. The views are fantastic” 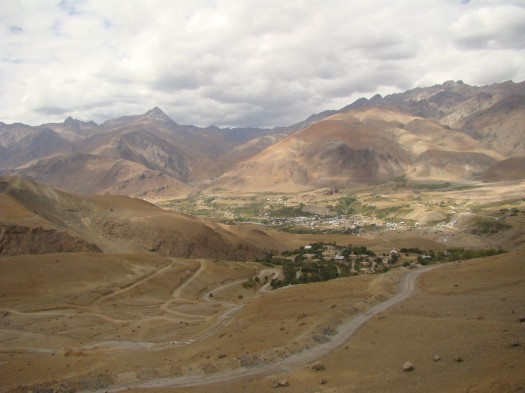 Drass town and the long and winding road!

So when I reached the town of Drass, I asked the folks there if the road is good enough for me to drive alone. A few advised against it. “Roads are pathetic. You are alone. Why’d you want to take such a risk?” they asked. While a few others said “Go ahead! It’s all ok! Just a couple of days back this huge gang of bikers who rode that path” A few meters ahead of I met a couple of trucks. It was all ok. They confirmed.

As I got farther and farther away from Drass, the roads become more and more bad. And steeper and steeper. I was not complaining. The mountain that I was climbing kept providing fantastic views of  Drass town as well as the mountains around it. Special mention had to be made of the 4875 – the strategic peak that Indian Army successfully captured during the Kargil conflict of 1999. The mountains initially a patch of grey transformed to a dark shade of violet and red. I would look up every now and then feeling that I will be at the top soon but then around every other corner, the summit rose a few hundred feet. I was still not complaining. After all, Umba La, was the only mountain pass on this 60 kms stretch of so called road. Finally two and half hours after I had left Drass, I was at the top, at 11000 feet ASL. It was time to descend. 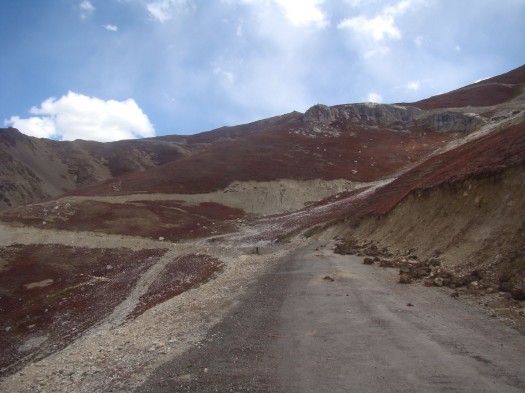 But hardly had I descended a few hundred feet from the top I had to stop my bike. Bamboozled! Behind me was the road that I had descend from. To my left, the mountain face. To my right a vast flat pastures And in my front another mountain wall. The road ended. I was baffled.  Where do I go now?? I looked to my right and saw a many Himalayan marmots running around on the plateau as cluelessly as I was . As I looked around wondering if I had missed a turned somewhere on my way down I noticed truck tyre marks on the pasture. I decided to follow the trail and that sent the marmots running to their burrows. As I rode few meters ahead I saw a neatly arranged stack of jute bags that were filled with something and a person standing near them. I was so relieved to see him. The first human being that I saw since the time I left Drass 3 hours back. Yes, I was riding for 3 hours without having seen any a single soul. I asked him if I was on the right track.

“Oh yes!” he responded,”Follow these tyre tracks and a bit further, there will be a stream running. Cross that and you see that mountain? Just round the bend, you will see the road. Climb the mountain and the mountain top. That’ll be Umba La. Descend that and you’ll enter Umba village and then a few kilometers from there is Sankoo”

“What???? The mountain I descended just now is not Umba La” I was shocked

“No! No! That pass has no name. The one ahead is Umba La” he replied.

“Ok! What are you doing here?” I asked

“We are just collecting dung. You see that jute sacks over there. Yeah, that’s dung. We’ll take it back to our village, dry it and store it to and use it during the winter for cooking, keeping warm. We came here yesterday morning. We’ll head back to our homes tomorrow afternoon. We’re almost done. Just a few more sacks” he explained.

“You mean to say you spend the nights here?” I got curious

“Yeah! We have set up camp nearby. It’s getting dark and the weather does not seem like it’ll hold up. Why don’t you stay with us? We have just Dal and Roti with us to share, if that’s ok with you” he invited.

I rode again and tried to cross a small stream few meters ahead but fell and my bike on me. I struggled but managed to pull myself out. I tried lifting the bike unsuccessfully. It proved a bit too heavy. I let it lie there went back shouted hard to the man I had just met. He waved a hand. I shouted I needed help. He just kept waving hands. I was breathless from just a couple of shouts and my mouth was dry. I just sat down and kept waving my hands and he started walking towards me. As he came nearer, he said “This was not the stream you were supposed to cross. You are supposed to cross from there” He said pointing backwards. “I shouted out to you as you missed that but probably you could not hear”

He helped me lift it up and I thanked him breathlessly. He again insisted on me staying back but it would take more than a fall off my bike to stop me.

And then started the long and lonely ride once again. To Umba La. It was close to four in the afternoon. And I wanted to make it to Sankoo at least by six. But the mountain roads and the climb never gave an inch for me to throttle. And then just a few kilometers afterwards its started drizzling and my bike stalled.

Raigad Fort : Stuff that legends are made up of An adventure enroute Zanskar Valley : Part II