Its not often that you wake up in the morning looking forward to showering under a huge waterfall. After spending the night in a lodge in village of Pallakal that lies on the Kerala side of the Kerala - TN border, we started early. The  village of Gavi, located inside the Periyar Tiger Reserve, was to be our pitstop for the day and though only 200 odd kilometres away, we knew it would consume as much time as the previous day’s drive (which was thrice the distance) owing to the mountainous and (at times) non existent roads once we entered the reserve as well our constant breaks for photography or a long lunch for that matter (We had to skip lunch and make do with bananas, chips and other such munchies eventually). 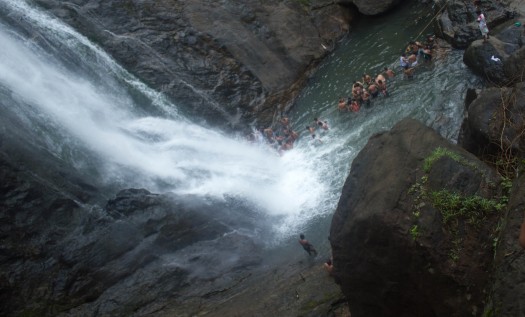 The Pallaruvi waterfalls though a lot greater in height and the water running down with a greater roar and the resultant fall into the pool producing a mist that dampens even the ones that decide not to venture into the water, was a crowded spectacle. I stayed far away, but rest of the gang had a quick and vigorous massage + jacuzzi + shower standing under the 100 feet gushing water. 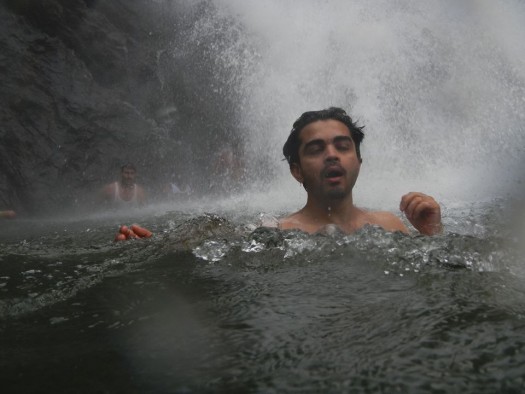 A quick stop at Patthimoonu Kannara Palam ( 13 Arched Bridge) followed along the way to Gavi. The bridge built during the early colonial era more than 100 years ago was constructed employing the Surki ( a mixture of lime, under burnt clay and water)  method of construction that even today, stands strong. The fact that this close to hundred meter long bridge hosted a functional meter gauge line until a couple of years ago  is as much a testimony to the strength and resilience of the construction  as to indigenous skills and technology of the engineers and workers who built it. 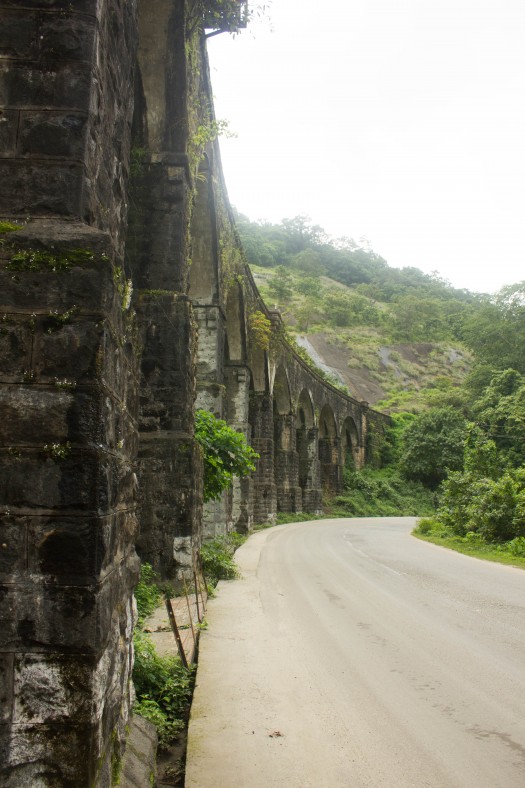 It is places like these, that I chance to pass by upon my travels that make me wonder and be awestruck by the history and the changing times that such buildings have been a witness to. What must it have been when the first train passed through this bridge from or towards a tunnel that lies on one side of the bridge? How much trade must it have witnessed being the only railway link between Kollam and Chennai? And how many people who pass today by the Shengottai-Kollam highway that runs parallel to the bridge stop and marvel at this piece of history before they move on to the beaches, backwaters and tea estates of Kerela? As we left the bridge and move on, I could only imagine the answers to these questions. 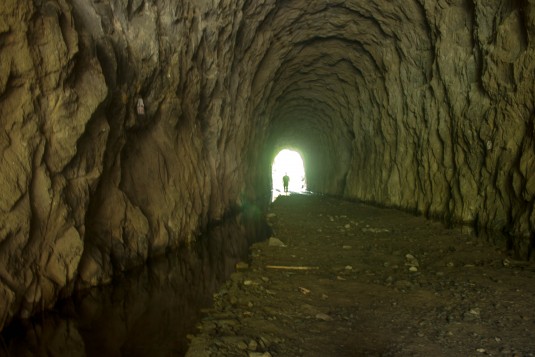 The weather turned from a weary- hot and humid to pleasant - rainy and cool as we rode along the state highways that were line with rubber plantations mostly, and at times banana plantations. And at regular interval were little villages with houses in every colour and shade that made me want nothing more than settle down right then and there at that place. 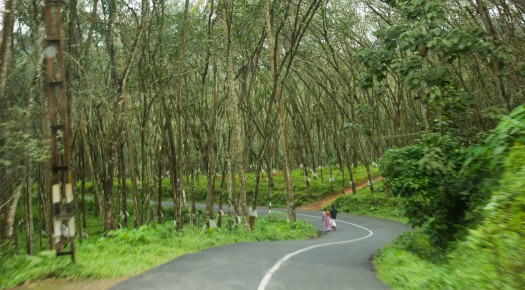 A state highway that runs through the sanctuary connects Angamoozhy to Vandiperiyar and people are allowed to drive their own vehicles. A permit from the range officer of the sanctuary is required and constant security checks along the route are to be expected if you decide to venture on a drive along — kilometres of unadulterated wilderness. This single lane road is so narrow that an oncoming vehicle would mean that both the vehicles stop and one manoeuvres into the bushes very carefully letting the other pass. And the weather, as wet and foggy as we encountered, slowed us further down along with the narrow potholed roads. In a certain sense it makes a great sense to keep the highway that way with all its limitations and restrictions limiting the flow of traffic and thus letting the wild animals have the rights to their lands and ensuring their conservation and protection.

The 60 km drive took close to 4 hours. And all throughout the weather remained foggy and wet with a mild drizzle every now and then. We knew that spotting a tiger in that forest while just riding those roads would be miraculous but I guess we went a little over ambitious, when we saw that the roads were strewn with elephant droppings all over, and hoped that we run into a herd of them just around the next corner. It wasn’t meant to be. 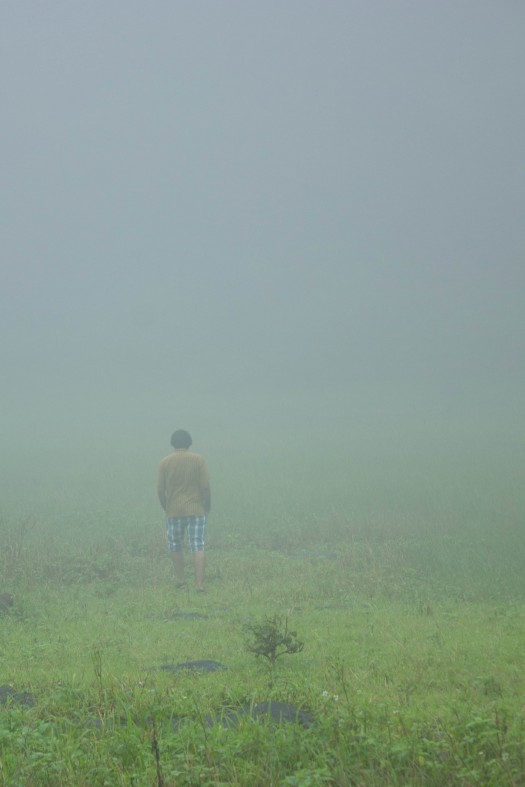 The weather inspired one amongst us, a flautist to perform a rendition of ARR’s Jashn-e-Bahara when we took a break halfway through the ride in the sanctuary. The misty weather, the melody of the flute and slight chill in the temperature and right there in the wild lap of nature. I couldn’t ask for more. A friend later informed that place where we were standing, relatively large and flat piece of land with knee-length grass rising out from a marsh and a cliff overlooking it was actually a mountain earlier. The rock from mountain was used to build one of the dams/reservoir in the reserve resulting it looking the way it was. In fact our voices echoed off the cliff. To call it a man-made natural wonder sounded rather oxymoron-ish. 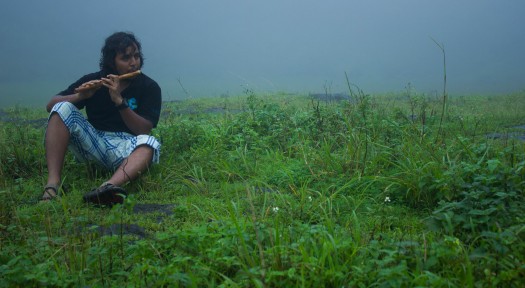 We reached Gavi just as it began to turn dark. At the check post in Gavi, we met John who was waiting for us since late afternoon. John was our contact in the reserve who’d made all the arrangements for stay and food that evening. A dark skinned man with a thick moustache and a receding hairline, John spoke with a heavy Malayalam accent. He worked as with the reserve and was a resident of Gavi .

We let him know of our desire to go on a small hike later that night, but John mentioned it is not allowed and not advisable as well. However he offered us to go for a short ride to the village where we could have a steaming cup of tea. And promised us that next morning would be a good time for a trek only if we were up early. He was going to lead us on a short trail in a core area of the reserve which the people who come visiting Gavi on the KTDC package tour are not allowed to. But if we were up early and began our drive to the starting point of the trail, we would not draw the attention of the authorities, them considering us to be a part of the package tour guests out on a safari tour of the sanctuary. 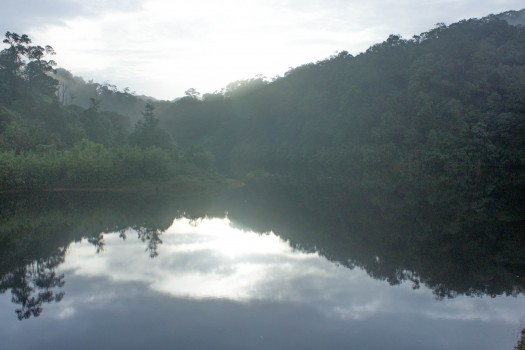 As we got back to our rooms after a sumptuous dinner, some of got a glimpse of what was to come the next morning. A couple of leeches had been happily sucking at our feet for their fill of blood. And as much as we enjoyed the walk next morning, a month later some of us are still struggling and coping with the itching of the leech bitten areas. But that came later. For then it was  just the time to tuck in and enjoy a good nights sleep after that hard day’s drive.

Western Ghats Further Down South: Shenbhaga Devi Waterfalls, Courtrallam Being MIA from this blog for 3 years and what was I doing all this while.