You already read about how uneventful the first safari that I took was. The next morning I took one more. I woke up at 4.30 in the morning to stand in a queue for the safari that lasts from 6.30 to 9.30. The number of people were comparatively less than for the safari the previous afternoon. Until the gates for the Forest Department office, I stood warming myself up with a small bonfire that was lit otuside the Forest Department gates where I met a few people. One of them was Ranjan - a Singapore based photographer. I asked if he wanted to share a ride. He said “I do not mind but I am finicky guy. If you move around the jeep too much or make noise or do something silly, I might snap” Just the right kind of  no non-sense person with whom I’d want to share the safari.

We were allotted Route 5 if I am not mistaken and we met our driver and guide. There was still some time for the drive to begin so we sipped some chai and Ranjan shared some valuable photography tips. They came quite a bit handy in the days to come. Thank you Ranjan!

A few kilometers into the safari, we saw pug marks and thereafter heard wild calls from afar. 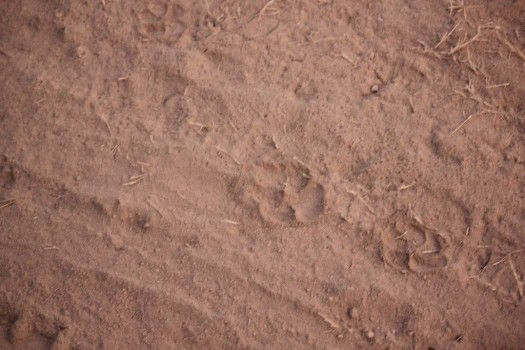 And then a few kilometers after the calls of the monkeys and the birds started growing louder and with that noises as a background score the first of these feral creatures walked out from the jungle bushes. I had goose bumps 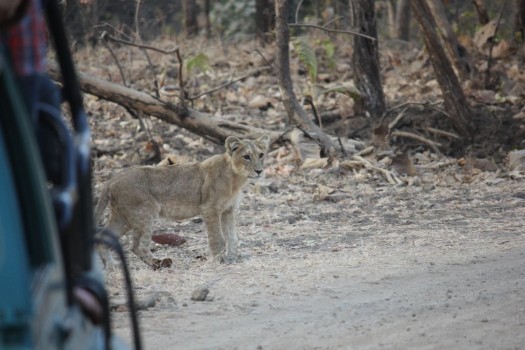 The first one I saw! Special!

And behind it walked another of its siblings. And such a graceful walk that was. 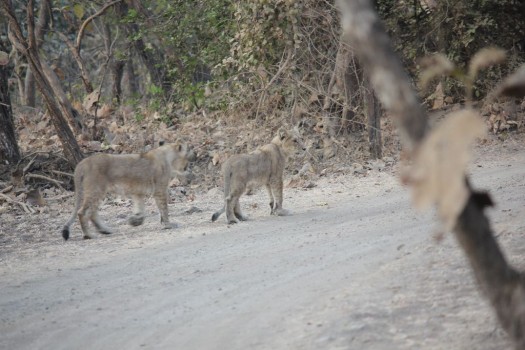 And they walked one behind the other

But unfortunately they crossed the road and we lost them in the jungle. It was hardly for two minutes that I got to see them and I thought “Is that all???”

But they walked out once again a few meters ahead and there was the entire Pride with them. 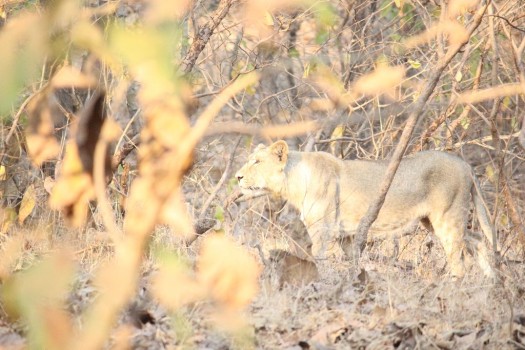 And one by one they walked out! 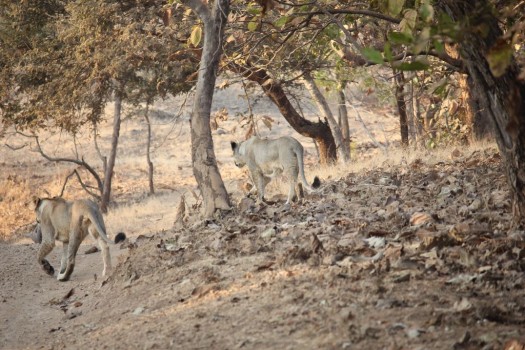 It was a Pride of 6 lioness and cubs and I could capture 4 of them in this one pic! 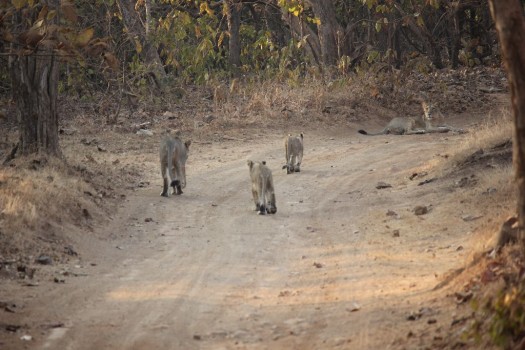 A Pride of Lions!

And then after walking some more, they finally settled down give us the honor of photographing them in their various moods. It was a beautiful feeling seeing these majestic creatures in their natural habitat! 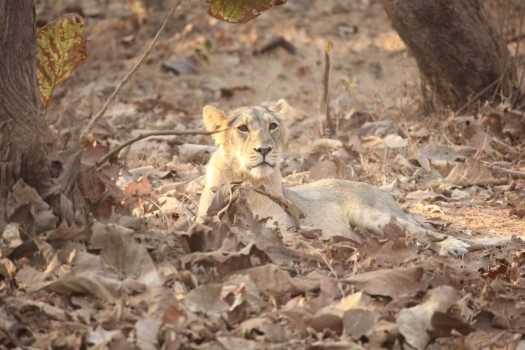 Basking in the sun on a chilly winter morning! 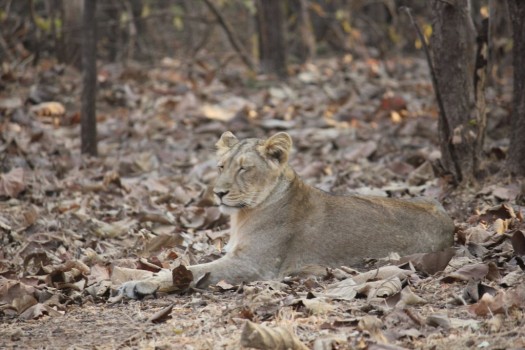 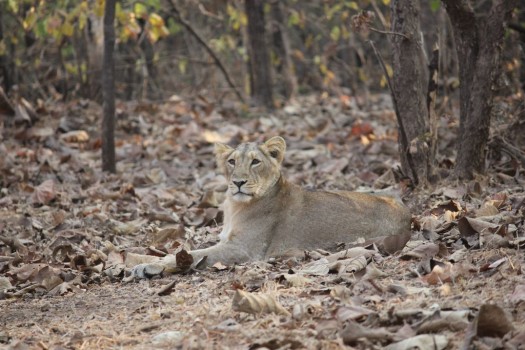 Okay! Have your way! Is this good?

But soon the words spread among other vehicles on the safari as well and they too came along disturbing the lions that were enjoying basking themselves in the sun and  they started walking off again. 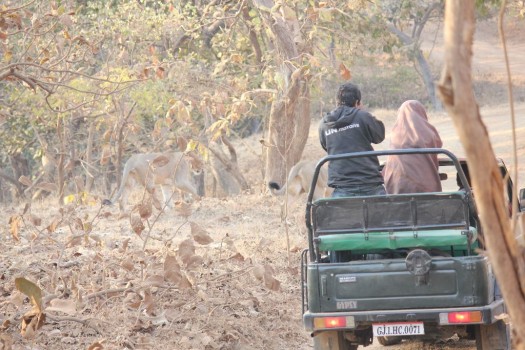 Yes! They were that close!

We too left the place as some more tourists started driving in and asked our guide that we want to see more. He took us to another place where we found them. The trackers told us that this Pride included 17 in all but they had  a fight among themselves just the previous night and the Pride was split into two now. One included 9 and other included 8. We saw the one with 9. 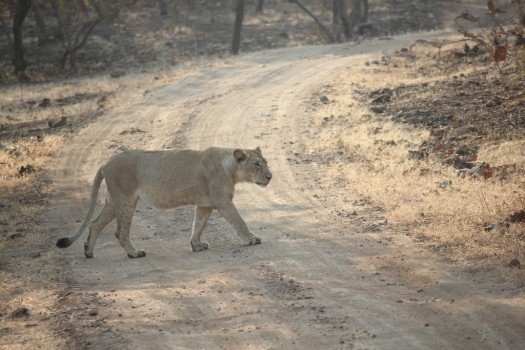 Why did the lioness cross the road??? 😉 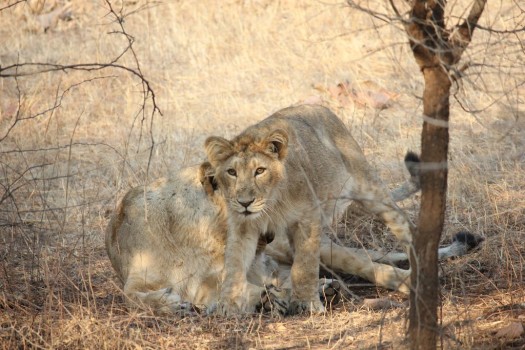 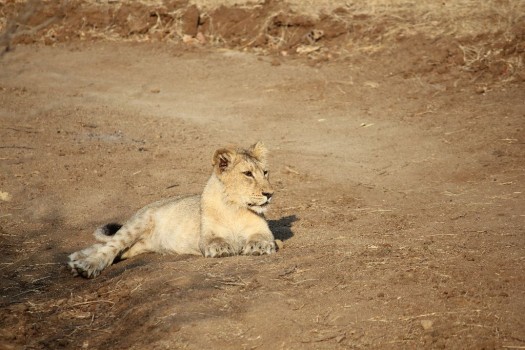 Please do not say 'Cute'. Lions are not cute!! 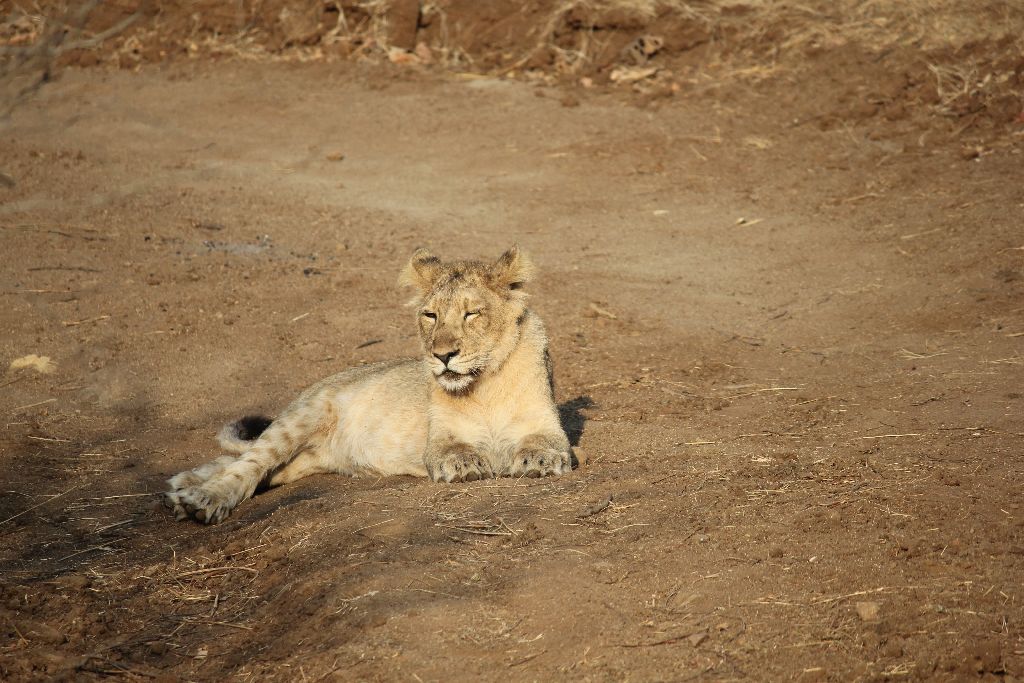 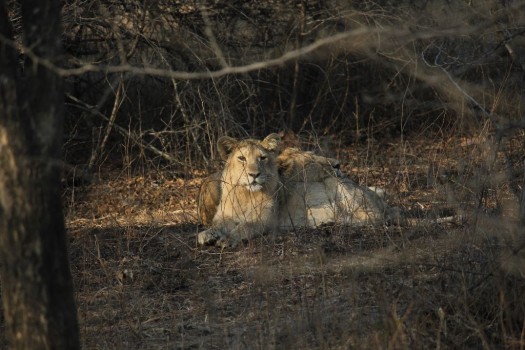 Though a bit under exposed, I like this pic !

A lioness was hurt during the fight that I mentioned. It lay among the bushes licking its wounds. 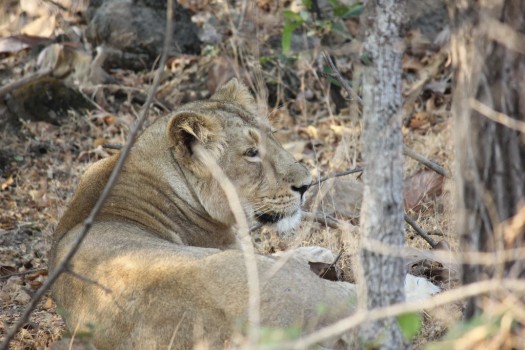 Time was running out and we had to get out of the forest before the clock struck 9.30. Because if we did not not just us but our driver and guide would also have to the bear the consequences from the forest officials. That ride back to the gates was an expereince in itself. The driver drove as fast as he could and I got a glimpse of what being in a 4×4 off road rally would feel like. The adrenaline in me wished the ride was longer.

As I came back to my hotel room, it was a feeling of elation and peace that I have never felt before. It was 9.30 on a Monday morning and as the rest of the world was about to reach office or were on their way I lay on my hotel bed smiling to myself !

Experiences at Than, Gujarat! My Journey to Gujarat - A Review