Experiences at Than, Gujarat!

The same fellow traveler who had recommended me to go to the White Rann of Kutch also had another suggestion – Than. Located 80 kilometers northwest of Bhuj, Than is a very small village, which has nothing to offer to tourist except a Fossil park that is run and maintained by a retired defense personnel. There are no hotels or guest houses, nothing to attract tourists, and has no mention in any guidebook. Except the locals in Bhuj, nobody knows that there exists such a place called Than. Just the right kind of place for me I thought and rode out one afternoon. I decide to stay the night at this temple just outside the village of Than (as my neighbor at the guest house had recommended) and from there move on to Fort Lakhpat further up north of Kutch.

I left the guest house at around 2pm and was at Than which is 60 odd kilometers away by 3.30pm or so. What I experienced once I was there was something that I would never forget.

The temple/monastery had this huge boundary wall and a gate. I honked my horn a couple of times for someone to come and open it and when none came I got off my bike and opened it myself. As I pushed the gate open it creaked. The sound spookier than the one in a B grade horror movie.  While I write I realize that the scene was an exact replica of a movie – A lone ranger enters an old and almost in ruins temple with an eerie background score (except that the background score was playing in my head). 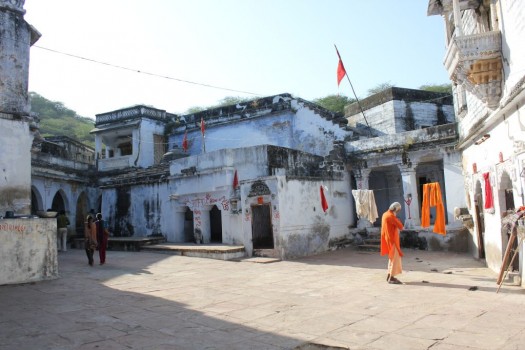 As I walked around I saw a couple of peacocks walking freely in the temple grounds among the overgrown bushes that nobody seemed to care to keep in check. The temple was huge and by the looks of its blackened walls, which I believe were white ages ago, it appeared as if the place was decaying. Adjoining the temple, on its rear end, is a forest and you could hear all kinds of sounds from there. 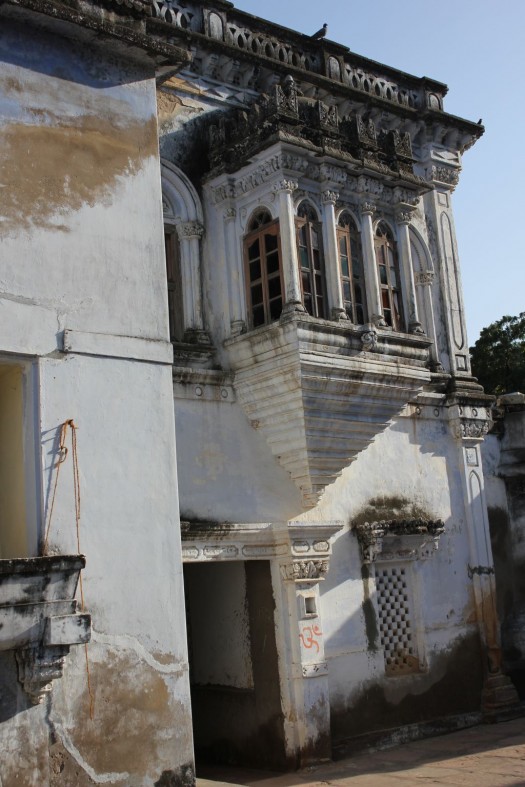 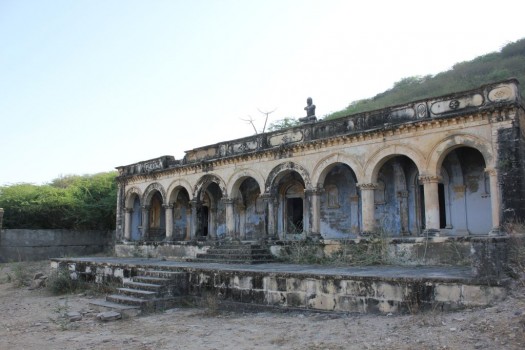 As I entered the main temple premises  I met a young man dressed in a sweater and a pair of trousers. He seemed like an administrative caretaker of these ruins. Despite the vibes that I was getting from this place, which were not very encouraging about staying the night there, I asked “Can I stay over here tonight?”

He led me to the room upstairs where they let people stay but only after the I answered his questions of general nature as to who am I? Where am I coming from? Where do I go?. The room was huge one probably 20 feet in width and 15 feet in length. There was no bed or bedding. Flies of all sizes were buzzing around but some of them were concentrated at once place. Right in the middle of the room, where someone was lying on the bare floor with a dirty blanket pulled over head entirely and covering the entire body. The flies were crawling over the blanket. A question shot up in my mind, who was it under the blanket – A man? A woman? A corpse? :O A chill ran down the spine.

Later, as I was about to exit the room, I heard a shout from downstairs and the guy who was with me ran down stairs. What was happening? I went down as well.

There were cows every where in the courtyard. Oh yes! I had left the gate open when I walked in and all the cattle walked in. There shout I heard earlier was that of a Sadhu (A saint/ temple priest), who was busy chasing the cows out of the gate. I was still considering if I should stay the night here after having a look upstairs. He shouted at me. “Park your bike inside! It’s an entire forest out there. You never know what would happen to your bike. And yes, make sure you close the gate!” I obeyed without a word. 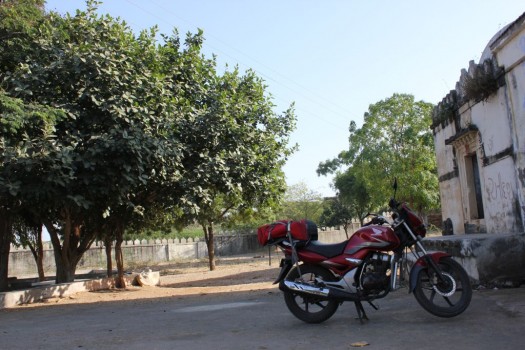 After parking my 'Beauty in Red' inside the temple premises 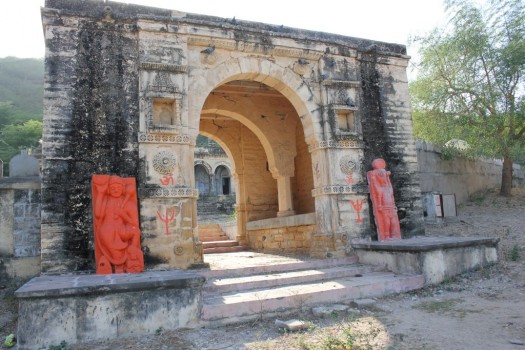 Another gate within the temple premises which led to the backyard

Creepy as it was I was still finding it a bit funny remembering the all those B grade Bollywood movies I watched as a kid. I was living a Bollywood story.

As I was parking my bike the Sadhu smiled at me and I smiled back. I walked towards him to have a chat. He asked me about myself and I told him. Then he started telling me the history of the area. The temple that I was standing in was almost 400 years old and the resident head of the temple was another Sadhu whom he referred to as Maharaj. There was one more such temple a few kilometers away by road on one of the mountains behind the temple. There stayed another Sadhu, who was the Guru of the previously mentioned Maharaj of this temple. I could go and stay there if I wished to. He continued on for a while smoking a beedi. I took leave of him to go and click some pictures. 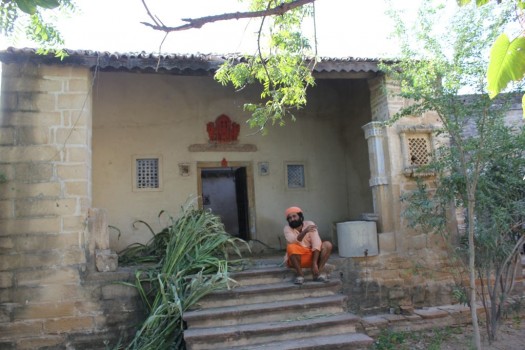 The Sadhu who told me the history of the place

I called a friend to share with him the experiences as I was telling him what I tell to you today. He was laughing and yet intrigued by this place that I was and asked me if I was intent on staying there alone, away from nearest settlement which was atleast a 20 min walk. I said I don’t know. I hung up and walked around, and exploring the area. 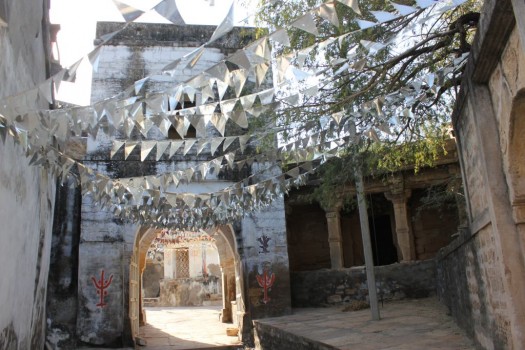 The narrow alleyways in the temple premises

And then I saw the writing on a wall which sent chills down my span. KAAL BHAIRAV. Anybody and everybody who has seen second rate Hindi horror movies identifies with the writing on the wall. Kaal Bhairav is one of many Hindu gods, and I might be completely wrong but in the movies he is always associated with some kind of witchcraft of black magic. And just as I was clicking the photo of the writing on the wall, someone touched my shoulder. I jumped a dozen feet in air by that touch and turned behind. It was the caretaker who greeted me earlier. In a monotonous voice he said “Maharaj has asked for you to come in”. I said “OK” and walked along with him 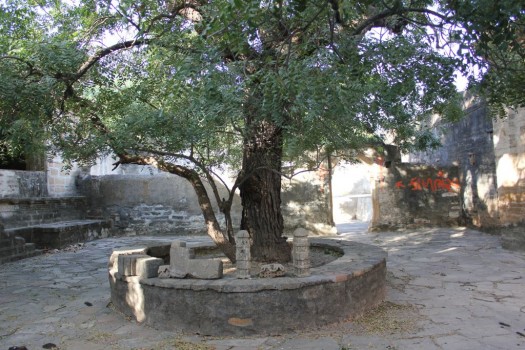 I walked to the main temple where the ‘Maharaj’ was sitting. I folded my hands and said Namaste to which he nodded. He was sat bare chested in a saffron dhoti.  A large round vermillion mark on his forehead, beard and long matted hair which was held in place by turban of saffron. There was a chillum in his hand, filled with weed, from which he took long noisy drags every few minutes. His look was of a man who was completely stoned and yet fully aware. With piercing eyes, and a monotonous yet firm voice he asked me

“Where are you from?”

“What brings you here?

“Where are you headed to?”

I answered them all as patiently as I could despite the army of flies that was attacking us from all directions. As I was not very sure of staying here I had not taken off my thick motorbiking jacket and the knee guards and the heat and the darkness of the room was not helping much with sweat trickling down the back of my ear.

All this while Maharaj stared at me with unwavering eyes.  The caretaker bought me some tea in a bowl rather than a cup. I cupped it with both the hands and sipped on.

“Do you intend to stay the night here?”

By now I had made a decision. “No. Actually its just 4.30 and I intended to go to Lakhpat. There is still some time for sunset and I think I can clock in a few kilometers”

“You can stay here I f you want. No problem. You’ll get roti and dal for dinner”

“Thank you very much. But I’d move on”

“Hhhmm. Not many tourists come here except for a few locals in Kutch, who know this place. There is nothing here. But at times we get an odd ‘gora’ (white man/foreigner) or two”

“Ok” I had finished off my chai.

I somehow dared and asked, can I click a picture of yours. He stared. “Why? What will you do with the picture?”

“What is your name?” he asked

“Which caste do you belong to?”

A twinkle in his eye. Sadhus are usually Brahmins I guess and he finally could associate himself with me.

“I don’t know much about all that” With the Hindu religion being classified in sects, sub sects, castes, sub castes and various permutations and combination, and me being least bothered about my religious identity I could not answer.

He nodded indicating that I could click a picture of him. I took one and showed it to him. He nodded and asked the caretaker to have a look as well. 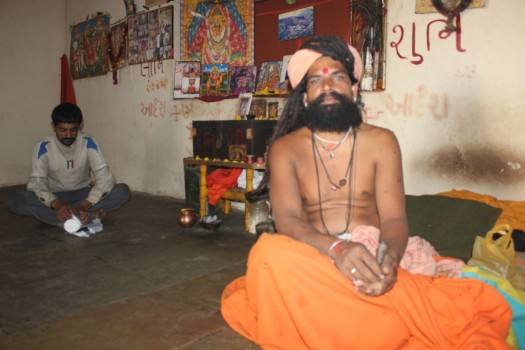 The 'Stoned Maharaj' and The Caretaker

“Ok, I will take your leave now”

Another stoned stare but a slightly relaxed nod.

I smiled to the care taker with folded hands and he smiled back. I put on my shoes and rode out with mixed feelings and yet smiling to myself about the experience I just had.

It’s always intriguing to make plans and sometimes your plans don’t turn into a reality — just like today. It was my ‘destiny’ to see this place, but to make it my ‘destination’ depended on my will, my ‘desire’.

(With editorial inputs from Chaitanya Gudipaty)

Did you ever have a spooky experience like the one I shared above in your r travels? Or was there sometime where your desire fueled your destiny? Leave a comment and let me know.