When I decided to ride to Gujarat I did not have any plans or a list of must visits with me except one - Gir National Forest! The Last bastion of Asiatic Lions anywhere in the world and if I had a chance to see the in the wild I would grab it with both the hands and give it my best shot.

Before I get on with the pictures, let me give you a brief about the place and its history. In the 1920’s the Asiatic Lion’s were as good as extinct. Hunting a lion was a matter of pride among the royal families as well as the British and the numbers dwindled to as low as twenty. It was then that owing to huge public outcry and media bashing the Nawab of the princely state of Junagadh and Viceroy of India decided to put a ban on hunting of lions and invested huge efforts in its conservation. Subsequent governments too followed the suit and today the number is a healthy 400 odd. In fact the number is just about the right number that Gir Forest can hold and the officials are already working on ways on how to tackle the situation when the population grows further.

I reached Gir National Forest on a Sunday morning and once I got hotel I went to the Sinh Sadan Forest Department complex and stood in the queue to get my permits for the Jeep Safari. The forest department allows safaris 3 times during the day and each safari last for 3 hours. In each batch they issue 50 permits which is to say they let 50 vehicles in at one time. Eacjh permit costs 1600 INR and you get an open jeep (which can accommodate 6 tourist+Guide+driver)+permit fees+guide charges+camera charges.  These are the rates for Indian Nationals which are far lower than what they charge for foreigners. If you have your own vehicle they let that in and you dont have to pay the jeep charges provided its is Euro II compliant. But the real fun is in the open jeep I met a guy there who was with his family and he said’s I could share the safari with him if I want.  I was a game.

Our safari started at 3.30 in the afternoon, and we were alloted route no 3 of the 8 routes open to tourists. 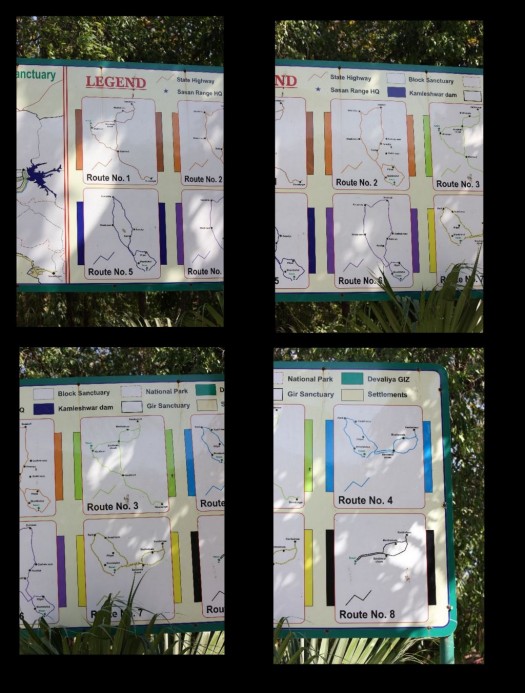 The 8 routes on which tourists are allowed

There is always a list of do’s and don’t when you go into forest like do not wear bright colours, do not smoke, do not make noise, do not tease the animals. Wait!! There are no do’s???  😐 😛 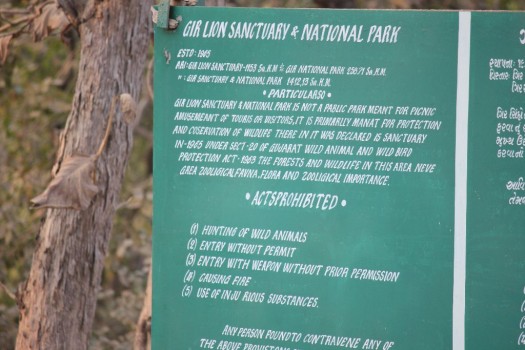 Some more 'Do nots"

We entered the forest and it was a bumpy ride on a very dusty track. Trees lined both sides of the track and their leaves were beginning to dry. Some though had shed all their leaves already. It would all the more barren in summer our guide told us. 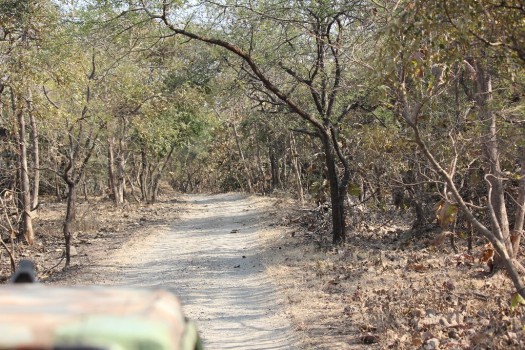 The dusty track of Route no 3 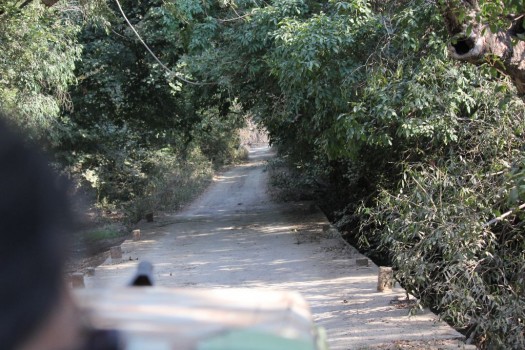 In midst of the forest is this huge lake, the name of which I have forgotten. If you are allotted any of the routes except 2,5 and 6 you will encounter this lake, where in you will be able to get off your jeep and take a walk, click pictures with the lake in the background to your heart’s content 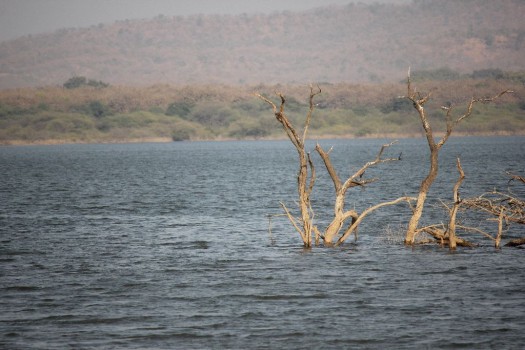 The safari however was turning uneventful. Except a few black faced langurs, sambhar and some deer we had not seen much. 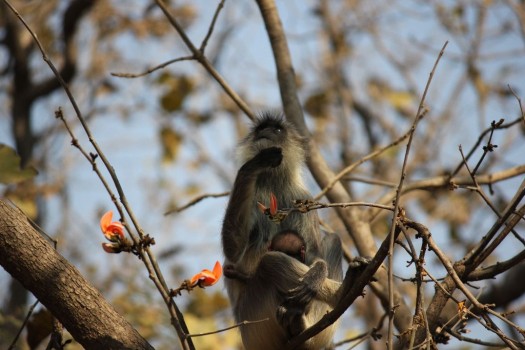 A Black Face Langur! But I bet, you did not notice the baby! 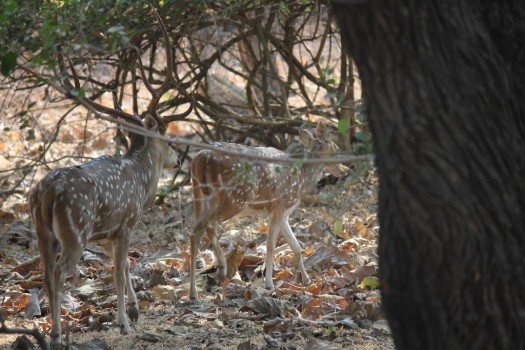 Spotted Deer are found in abundance! 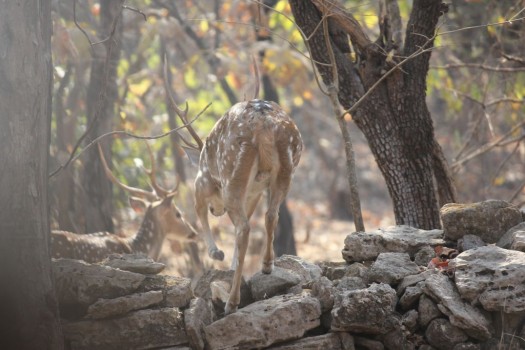 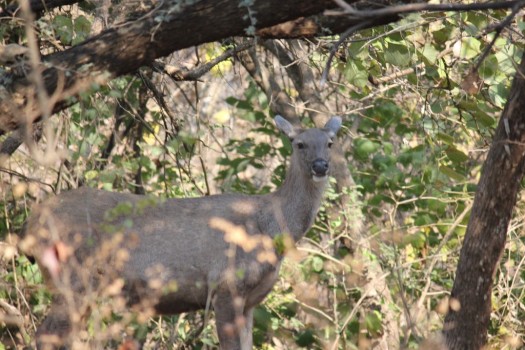 At various place in the route there are water tanks build. They come very useful for the animal during the summer where the collect to have their drink. This is where you will find many animals during the summer! 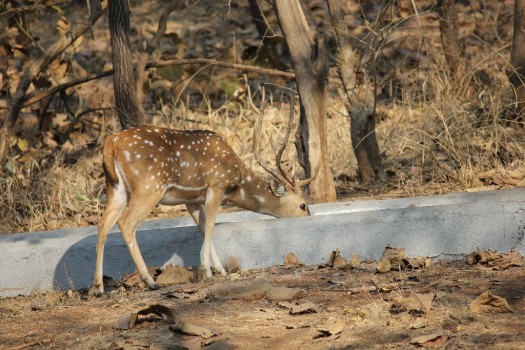 A deer having a drink!

The safari today was uneventful, and we could not sight a lion or a pride of one. As the sun was setting down it was time to return back. And so we did. 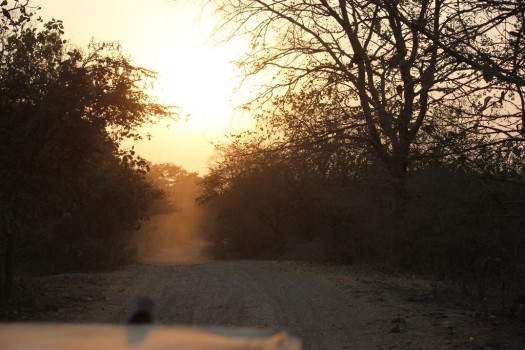 I however was not going to settle down and had already decided to take a few more trips into the jungle. And I did and then I saw the lions…. 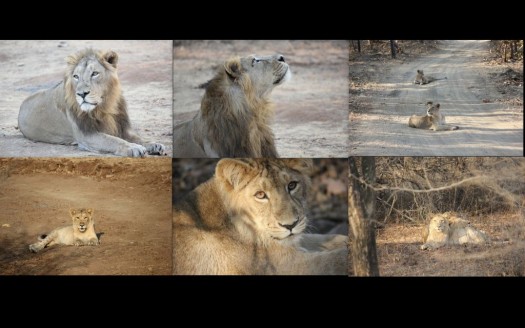 King of the Jungle!

Come back to see some more lion pics and read my story on how I saw the lions!

Visiting the White Rann of Kutch - A photostory Experiences at Than, Gujarat!